I want to discuss stablecoin economics, in particular providing a high-level overview of (1) what stablecoins are, (2) the role we see that they play in fueling a vibrant on-chain economy, and (3) their role as a fundamental DeFi primitive that’s fueled the Cambrian explosion of DeFi protocols we’ve seen in recent months.

The idea here is to provide a high-level overview, and not an especially technical one, so as to be of use to a broad readership. I’ll also briefly, for context and full disclosure, provide a sense of how we here at Agoric, where I’m a co-founder and economist, are thinking about these topics.

What Is a Stablecoin? So what is a stablecoin? Essentially, a stablecoin is a digital asset that tries to maintain price parity with another asset. Typically, a stablecoin will be pegged one-to-one with the U.S. dollar, the dollar being, at least for the time being, the global reserve currency. However, the peg could be something else: a yen, a euro, a basket of currency, or even the price of gold.

The essential challenge with any peg is how best to balance money supply with money demand. Money supply is something that an issuer of currency typically has some control over, while money demand is largely out of the issuer’s control. In most cases, the issuer would be a central bank, or, in crypto, the chain or smart contract. Money demand depends on the willingness of the users to hold the currency, in order to spend, invest, or otherwise engage in economic activity.

Being cryptocurrencies, stablecoins are quite new, but we’ve already seen sizable growth with over $22 billion market cap in stablecoins. And as you can see from this chart, it’s really grown tremendously over the last several months. 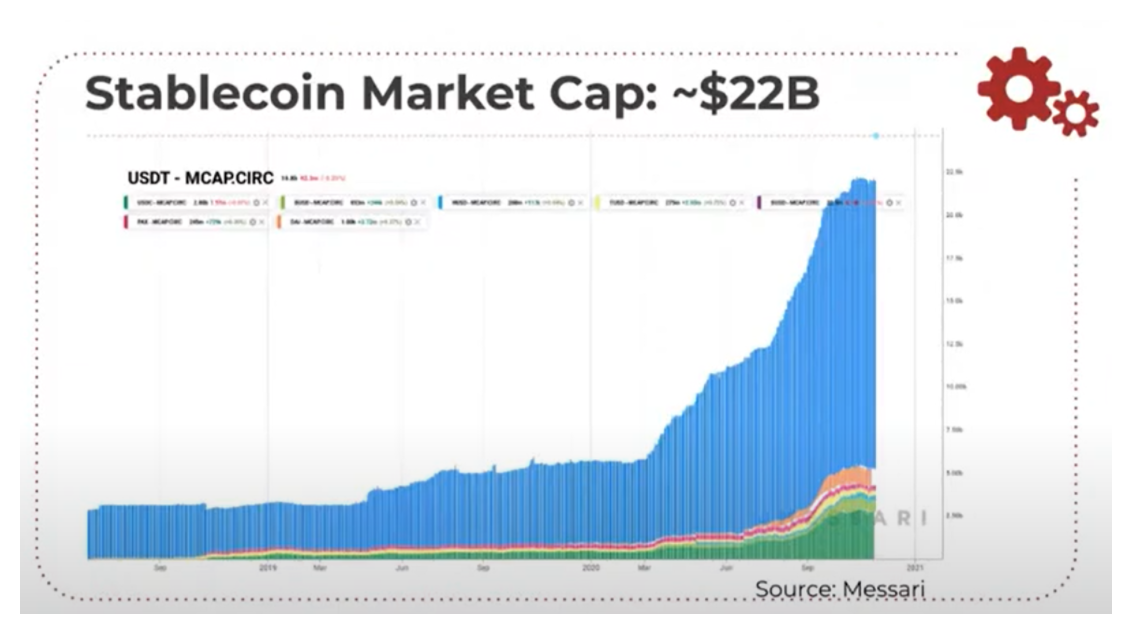 What’s not visible in this chart, though, is that there are lots of different types of stablecoins, often categorized according to the stability mechanism that they use. You often see them categorized in terms of off-chain collateralized stablecoins, such as USDC (USD Coin) or USDT(Tether) among others. Let’s walk through examples:

Off-Chain Collateralized Stablecoins (e.g., USDC) With off-chain collateralized stablecoins, you bring actual dollars to a financial institution, and deposit the dollars with the financial institution, which then issues you a digital representation of those dollars that you can then use on-chain. At some later date, you can exchange those digital dollars back for real dollars. The advantage of this approach is there’s a clear connection between the dollars that are deposited and the digital representation of that dollar on-chain. The disadvantage, of course, is that you’re relying on this financial institution to control and keep custody of the collateral.

On-Chain Collateralized Stablecoins (e.g., MakerDAO) An alternative is on-chain collateralized stablecoins, where instead of holding dollars off-chain, you actually use crypto assets as collateral. These can be held on-chain in smart contracts on top of decentralized platforms, thus avoiding the problem of having a single trusted third party who’s in control of the collateral. MakerDAO is the best known example. MakerDAO issues Dai stablecoin on top of Ethereum, which recently surpassed over a billion Dai issued.

Global Stablecoins versus Local Currencies There are numerous designs beyond those few examples, but rather than go into all the variations of stablecoin mechanisms, I want to focus on a different distinction, the distinction between global stablecoins and local currencies.

Many stablecoins seem to have the ambition of being a global currency, or at least the global means of payment, and these go across the board. You have the off-chain collateral stablecoins that we’ve already talked about, such as USDT and USDC, not to mention PAX, JPM Coin, and Libra (now called Diem). There are the various crypto, including AMPL and Dai, as well as Celo, Terra, MR, and RSV. We’re also beginning to hear about Central Bank Digital Currencies. And of course we shouldn’t forget Bitcoin.

But I think this focus on global currencies and global means of payments can be misleading. Which is why I want to focus on what I call a “local currencies”. A local stablecoin, or better yet, a local currency, is local to a particular crypto platform the way a currency is local to a particular country (e.g., using Australian dollars in Australia, or Leks in Albania). Local currencies facilitate on-chain commerce and finance, allowing you to easily trade and exchange digital assets, and create complex financial instruments on top of those digital assets.

For this local currency to work well, it needs to serve the functions of money. It needs to be a medium of exchange, commonly accepted in exchange for the goods and services on the chain. It needs to be a unit of account, facilitating economic calculations by making it easy to compare prices and rates of return, both on-chain and off-chain. And it needs to be a store of value. What economists typically mean by “store of value” is it has stable purchasing power over time. This is where stability matters. Local currencies seek to combine a medium of exchange, unit of account, and store of value into one asset.

Platform Currencies This notion of having a local currency on a platform for exchange of digital assets and goods and services is nothing new. We’ve seen this in games and virtual worlds for decades. 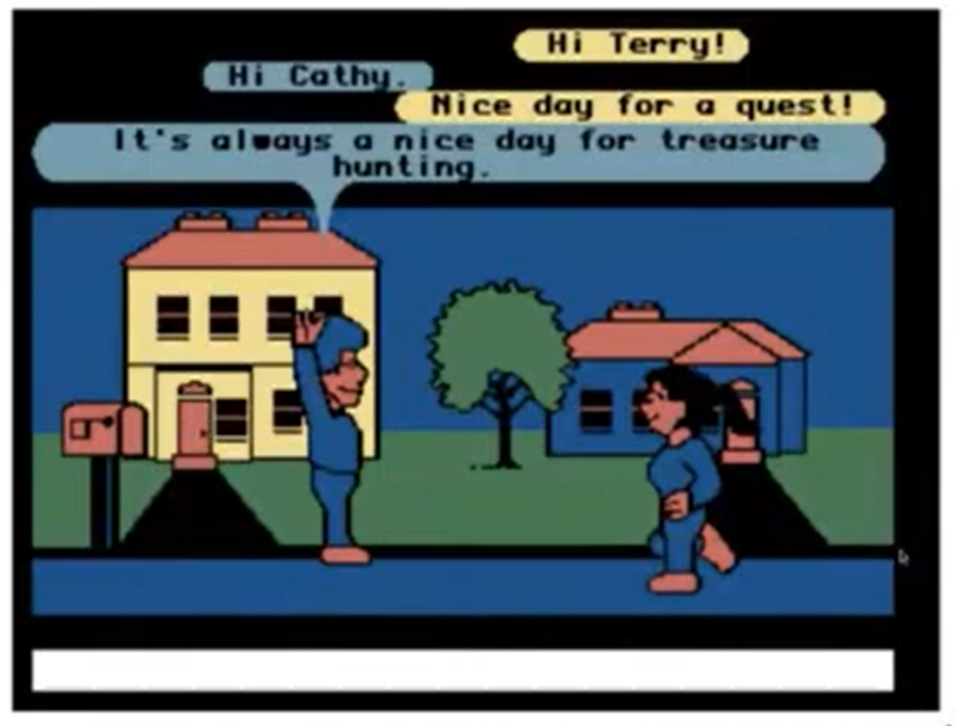 The above image dates back to the first virtual world, back in the 1980s, where Lucasfilm’s game Habitat had a currency called Token, which was used for a variety of purposes, creating a full-fledged economy on the system for exchanging digital goods and digital services. (Side note: my Agoric colleague Chip Morningstar was project leader and principal designer on Lucasfilm’s Habitat.)

We see smart contract platforms as an extension of this, but where they differ from virtual worlds is that they’re much more open to and embedded in the global economy. We like to think of the smart contract platforms as being essentially small, open economies. They’re “small” relative to the size of the overall global economy. By “open,” we mean the economy is open to, embedded in, and exchanges with the global economy, including economic activity on other blockchains.

Monetary Policy Choices If we view smart contract platforms as open economies, we can ask the question: What’s the best monetary policy? When we look at the real world, there are several different monetary policy choices. One is the quite common central bank model, where each economy issues its own currency. At the other extreme end of the continuum, you have dollarization, where, for examples, countries such as Panama and Ecuador use an external currency, often the dollar, as their local currency. And then there’s a currency board, which is a compromise between the two, where a currency board issues its own currency, but that currency is backed one-to-one with an external currency.

Central Banks of course are widely used. They give you flexibility, although that flexibility is both good and bad. There’s a long-running debate in economics between the merits of rules versus discretion, with many arguing that rule-based systems are better for long-term economic growth. The challenge there, though, is how do you credibly commit to following the rule? This applies, as well, to exchange rate policy, where it’s difficult for central banks to credibly commit to defending a pegged exchange rate.

There’s this notion of the international monetary trilemma, where your central banks can only pick two out of three options: (1) fixed exchange rate, (2) free capital flows, and (3) independent monetary policy. Often, this discretion can lead to two problems, to inflation or devaluations, and that has led some countries to go sort of the opposite extreme in the form of dollarization, where you have no discretion because you’re using an external currency. This can be costly because you need access to the external currency for local use, and there’s a certain loss of monetary sovereignty, where you’re subject to the monetary policy of the external currency you’re using. You’re basically betting that that policy is better than what your central bank could do.

As I mentioned, the currency board fits in as an intermediate step between these two extremes. Perhaps the best known is the Hong Kong dollar, which is issued by the Hong Kong Currency Board. It’s much more rule-based than dollarization, in the sense that you issue your own currency, but it is backed 100% by an external currency and it’s fully convertible into that external currency. Reserves are usually 100%, or a little bit more for an extra buffer. And there’s the ability to get some certain degree of monetary sovereignty where you can capture seigniorage revenue in the form of interest on the reserves, although not from inflating the currency.

On-Chain Currency Boards On-chain collateralized stablecoins are quite similar to currency boards, in that they attempt to hold 100% reserve of the stablecoins issued. However, there’s a challenge that they face that currency boards don’t, and that’s that you can’t actually hold dollars on-chain. What you can do is hold a digital asset on-chain, and either it’s a digital representation of the dollar that gets you back to the off-chain collateralized asset, or you hold a crypto asset, where what you’re trying to do is maintain the reserve at 100% of the dollar value of that asset.

For example, with MakerDAO in the early days, it held ETH as the currency in reserve, but committed to holding 100%, or in the case of the buffer 150%, of the dollar value of ETH in reserve for every Dai issued. The level of indirection creates challenges. First, you need an oracle, either off-chain or on-chain, that gives you a way to determine what the dollar value of the collateral is. Second, it leads to the issue of liquidation: What happens when the value falls below 100%? You need to commit to liquidating the collateral in order to buy back the currency.

Dai Helped Fuel the DeFi Explosion What I want to emphasize here is that when we look at what’s been happening in the DeFi space, Dai has really helped fuel the DeFi explosion. When Maker came out with Dai, it could be plugged into a variety of different DeFi protocols, providing a standard unit account for comparing the rates of returns across the different protocols. This chart below is a snapshot of an instance where the demand for Dai surged because it could be used easily in Compound. 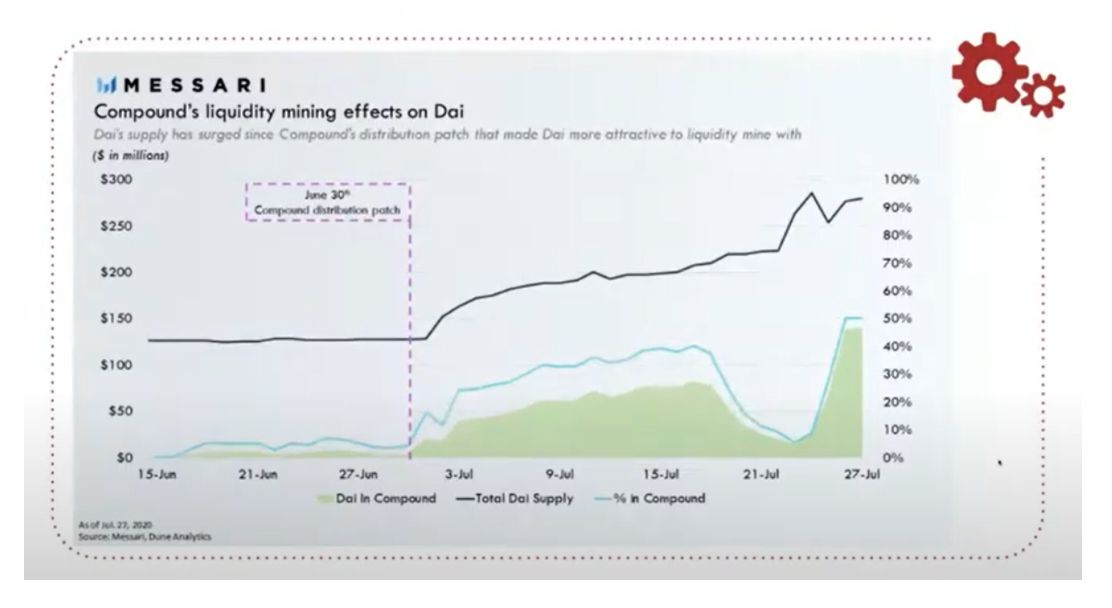 At Agoric we see the real value of stablecoins, at least in the short run, in not so much being a global currency, or global means of payment. Instead, it’s really about being a local currency able to fuel on-chain economic growth. As economist Barry Eichengreen has said, “Money makes the world go round, but it does so by greasing the wheels of commerce and finance.”